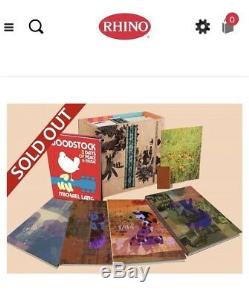 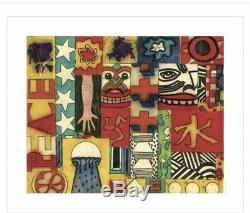 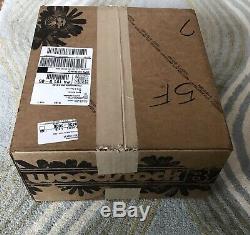 One of 1969 Box Sets. 38 CDs, 432 Tracks - 267 Previously Unreleased. Blu-ray of the Directors Cut of the Woodstock film. Woodstock Hardbound Book by Michael Lang. Ephemera including Replica Original Program, Replica Posters, Henry Diltz Photo Prints, Guitar Strap. Housed in a screen-printed plywood box with canvas insert, designed by Grammy®-winning graphic designer Masaki Koike. Limited, Numbered Edition Of 1969. This summer marks the 50th anniversary of Woodstock, the defining event of a generation and one of the most iconic moments in popular music history.

Despite its enduring cultural significance, no one has ever attempted to document the historic festival as it unfolded in real time. Limited to 1,969 individually numbered copies, WOODSTOCK - BACK TO THE GARDEN: THE DEFINITIVE 50th ANNIVERSARY ARCHIVE features 38 discs, 432-tracks - 267 previously unreleased - a near complete reconstruction of Woodstock clocking in at 36 hours, with every artist performance from the festival in chronological order.

Housed in a screen-printed plywood box with canvas insert inspired by the Woodstock stage set up, the set also includes a Blu-ray copy of the Woodstock film, a replica of the original program, a guitar strap, two Woodstock posters, a reprint of a diary written by then 17-year-old Kevin Marvelle during the festival, two 8x10 prints from legendary rock photographer Henry Diltz, and essays by Andy Zax, acclaimed music scribe Jesse Jarnow, and trailblazing rock critic Ellen Sander. The archive also contains a copy of Woodstock: 3 Days of Peace & Music (Reel Art Press), a comprehensive new hardbound book about the event written by Michael Lang, one of the festivals co-creators. Includes Full Performances by the Following Artists (In Chronological Order). Sly & The Family Stone.

The Definitive Complete Archive of the Entire Festival. Get this treasure while its still available.

The item "RHINO WOODSTOCK-BACK TO THE GARDEN THE DEFINITIVE 50th ANNIV ARCHIVE BRAND NEW" is in sale since Monday, August 5, 2019. This item is in the category "Music\CDs".